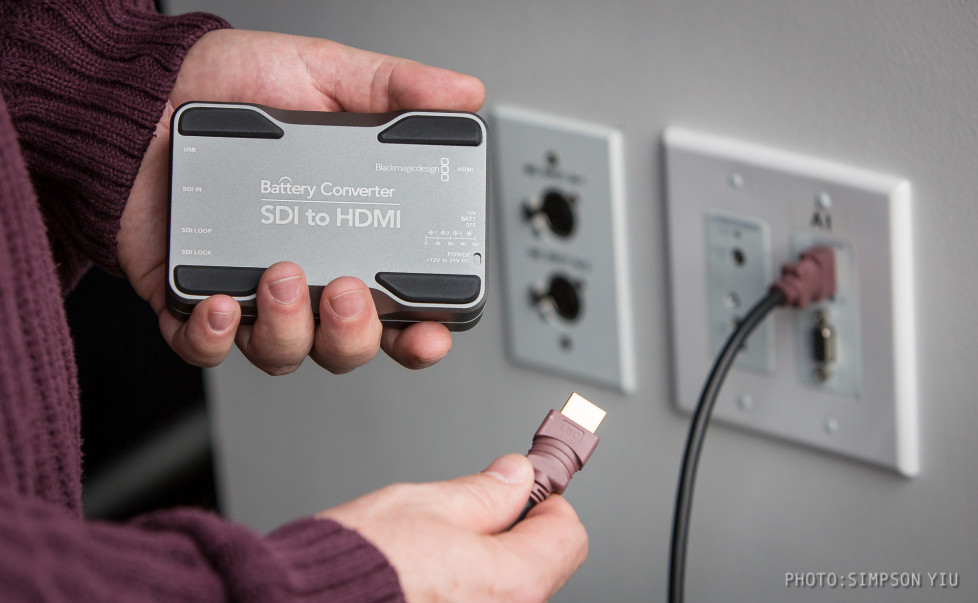 Recently, I was asked to record a live event in a corporate cafeteria. The plan was to edit the footage in post-production for future use, but about 30 minutes before the event was to begin, I was asked if I could run the video out of one of my cameras into the cafeteria’s A/V system. Needless to say, my team and I had not set up or tested a live-feed for this event. With the clock ticking, I asked to see the interface to the A/V system (see photo below) and crossed my fingers that I could MacGyver a solution together.

When I looked at the A/V system’s ports I found both SVGA and HDMI inputs. This made sense because the A/V system was set-up to make it as easy as possible for employees with laptops to connect to the cafeteria’s overhead displays and TV screens. The HDMI input was my gateway into the A/V system. The problem was, a professional-level rather than consumer-level HDMI solution would be required to pull this last-minute request together.

While no maximum length for an HDMI cable is specified in the HDMI standard, signal attenuation (dependent on the cable’s construction quality and conducting materials) limits usable cable lengths to about 15’. Depending on the quality of your cable it is possible to have success with longer cables.

The solution I needed would require a cable run of at least 100 feet—well beyond the realm of possibility with any HDMI cable. However, a solution for this event was still within reach: my cameras, the Canon XF105, had both HDMI and HD-SDI outputs.

This was key, since HD-SDI cables don’t typically have attenuation issues until the cable reaches distances of 300 feet or more.

In the case of the cafeteria job I had well over 100 feet of unused HD-SDI cable sitting on one of my camera carts. This is where the Blackmagic Design Battery Converter HD-SDI to HDMI came into play: I ran the HD-SDI cable from the camera over to the A/V port, plugged it into the converter, and plugged the converter into the A/V system’s HDMI port. The video instantly appeared on the overhead projector and LCD displays throughout the cafeteria.

I am a fan of Blackmagic Design products. That being said, their gear often takes a lot of testing and setup before it will work the way you may want it to. What you gain using their lower-priced gear is offset by additional training or testing.

Blackmagic Design also makes a Battery Converter HDMI to HD-SDI box as well as two similar “Mini Converters” and two similar “Heavy Duty Converters.” An additional option is the ATEM Camera Converter, which allows you to send two-way video and talk-back if you are using optical cable rather than HD-SDI.